DOOM - "where the sanest place is behind a trigger."

Doom. The mother of all FPSes ever. The greatest game ever made. The game that never ages. The game that is still just as sublime as it was some 27 years ago. It's the shooter where you come to rip and tear all of the hellspawn that dare intrude Earth or the solar system.

Call it however you want, say it however you want to say it, it's certainly an amazing game even now, and it needs no introduction. Although I was born well after it released on December 10, 1993, when I first played it at an age too early, it would become an obsession that would last to this day. Here you can find all the custom WADs I have made for it for your playing pleasure. Most of it is going to be vanilla-friendly, but I might make some that are more apt to take advantage of GZDoom/Boom features. For now though, expect nothing more from me than vanilla WADs.

Go ahead, take a look at the new adventures where Doomguy smashes the forces of Hell, made by yours truly. You know you want to!

TO RIP AND TEAR

Here's some of my WADs, released or upcoming: 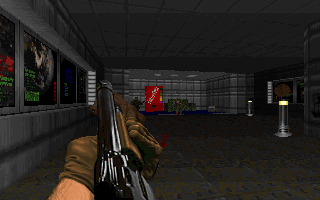 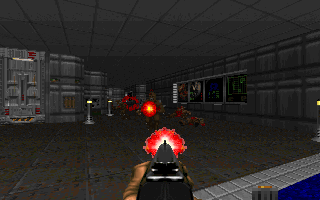 Elevator to Elevator (RELEASED) - A short to medium-length map set in a far-off UAC base, where you have to fight your way through this section of the base to the working elevator on the other side of the base. Medium-difficulty, but fair warning: it's a proper challenge on UV! Credit to Nick Baker from Realm667 for some textures used and Kinsie for his MIDI compilation from which I borrowed a MIDI for use as music for this level. Download here!

Plumbing with a Demonic Flavor (WIP) - A short to medium-length map set in a sewer in a UAC base somewhere in the Solar System. Made to partially emulate the Doom 1 and Doom alpha architectural styles, as well as using some textures from both. Partial inspiration drawn from Half-Life's sewer levels.

Deimos Supply Station (WIP) - Another simple, 1-level WAD set on a supply station on the Martian moon Deimos. Mission is, you guessed it, clear out the hordes of demons hiding inside. Will likely change its name to something more interesting as I develop this WAD.

The Immortal Walls of Torment (WIP) - A much longer, more difficult, more challenging 1-map WAD set in and around a fortress of an ancient demon in Hell. Basically, you've been ripping and tearing for a while, but somewhere along the line you ended up captured by said ancient demon. You find yourself in a prison cell in an underground dungeon, and break your way out to find yourself in front of a gigantic hellish castle, which will only get more brutal as you enter it. Your goal is to, as the Doomguy, to find the king demon of this castle and put him down so hard that even Hell won't be able to reach him!